What is the difference between wild turkey and turkey vulture?

Wild turkey and turkey vultures do not have much in common. They are different from each other physically and behaviorally. Both are large birds without feathers on their heads which are red. The two feed on different foodstuffs.

You May Also Like: Difference between Buzzard and Vulture 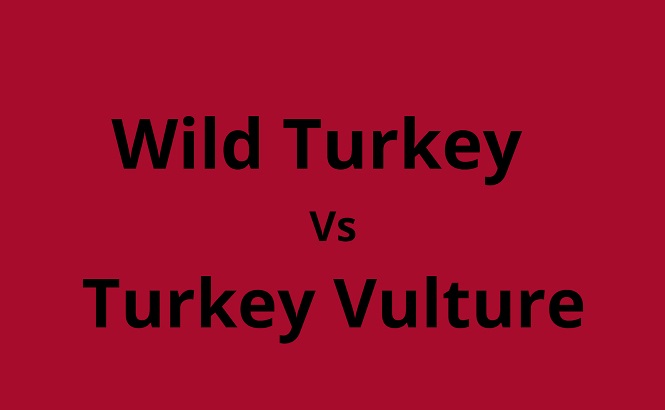 What is Wild Turkey?

It is similar to domestic turkey. It is native to North America. They are ground birds and they look for their food on the ground. They live both in softwoods and hardwoods. The color of its feathers is dark-blackish or grey with a coppery sheen. They have a growth on the heads referred to as caruncles.

They have three toes in the front and a rear-facing shorter toe in the back. Males have a spur behind the lower legs. The males are larger and easily noticeable than the females. They have vocal organs and they communicate to others in various ways. They can cluck, purr, gobble, yelp, whine, kee-kee, or even putts.

They are fast fliers and agile although they are heavy. Their eyesight is good for the day but it gets poor at night. Their predators may hunt on them at night. They are omnivores although they mostly prefer nuts, seeds, or roots. Sometimes they feed on insects and small reptiles.

See also  10 Difference Between American and English Bulldogs (With Table)

Wild turkeys balance the ecosystem and they are also important in North America where it is mostly used in cultural functions as the main meal in thanksgiving feasts.

What is Turkey Vulture?

There are 5 sub-species of a turkey vulture. It is a species of scavenger bird mostly found in southern Canada and South America. It mostly lives in open and semi-open areas such as pastures, shrublands, subtropical forests, and deserts.

It has brownish to black body feathers and silver-grey flight feathers. The adults have smaller heads in comparison to the rest of the body. The head is red and has no feathers.

They are carnivores. They mostly rely on meat. They feed on decaying animals, open lying fish, and live insects. They have keen eyesight and a sense of smell which enable them to fly low and identify decaying animals.

The turkey vulture does not have the vocal organ in birds (syrinx). This makes them have few ways in which they communicate with others. They are only able to hiss or grunt as a means of communication.

You May Also Like: Difference between Emu and Ostrich

See also  10 Difference Between Buffalo and Bison (With Table)